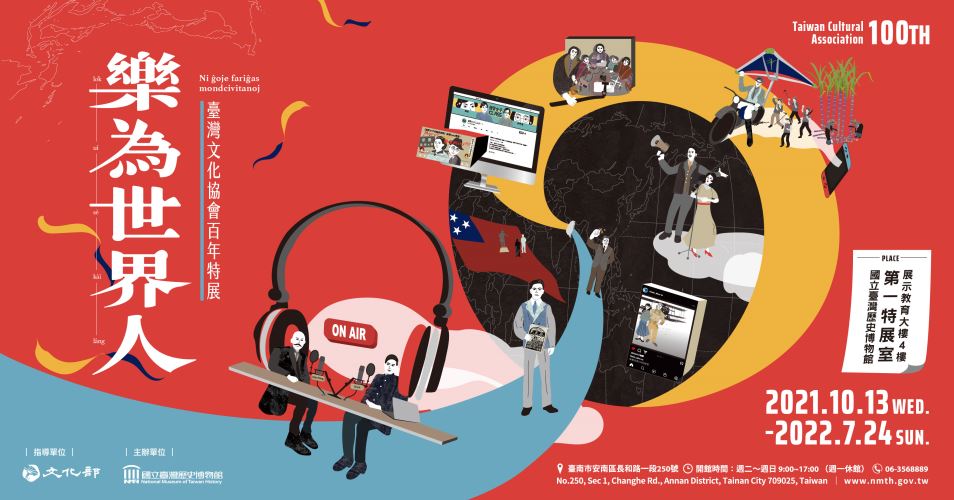 Changing a person’s concept of the world can change that person’s behavior. A change in a group of people’s concepts of the world can change the destiny of a country. The Taiwan Cultural Association was one of many social movement organizations that existed between 1921 and 1931. Its membership barely exceeded 1,000, and it was not the first social movement grouping in Taiwan’s history.

However, its members embraced new concepts of the modern world and had the courage and enthusiasm to put their thoughts into practice. They attempted to change the worldview of the era’s nearly four million Taiwanese people, while trying to alter the destiny not just of Taiwan, but also of the world.

When the group was founded, Chiang Wei-shui composed the song, “The Song of the Taiwan Cultural Association”:
We hope our missions will be fulfilled in the end, and we are blessed to be global citizens. Long live the people of the world, and Taiwan has a widely respected reputation.

What were their missions? What did they actually do and what was achieved? What spirit did they embrace? What changes took place in the process of enthusiastic participation? A century later, are we blessed to be global citizens as they hoped?

Looking back at that era, their conscious and dream-seeking journeys are displayed before us.

Skyview of the World

In 1917, Hsieh Wen-ta, a 16-year-old boy in Taichung, looked up at the sky and watched an air show featuring Arthur Smith, a stunt pilot from the United States.

Three years later, he graduated from a Japanese flight school and became the first Taiwanese-born pilot in history.

From August to October 1920, Hsieh paid flying visits to Taichung and Taipei, attracting public attention. Students at the Taipei Medical School and the Normal School were particularly excited and held support events. On September 23, the “Hsieh Wen-ta Flying Support” attracted thousands of people, and was the largest gathering of youth ever in local history. On October 17, Hsieh flew the airplane he named “Hsin Gao” to Taichung for an air show. Later, he flew north to the Taipei Military Training Ground for another show.

The Taiwan Cultural Association was established on the first anniversary of his Taichung air show.

The Advocacy of Taiwanese

On the afternoon of October 17, 1921, the Taiwan Cultural Association was inaugurated at Blessed Imelda’s School in Dadaocheng, Taipei. There was a total of 1,032 members and more than 300 people attended the event, with students from the Taiwan Governor-General’s Medical College, the Normal School, the Business School, and the Industrial School accounting for the majority. They reviewed the articles of association, nominated Lin Hsien-tang as chairman, director of election affairs, and the association’s representative.

This organization brought together elites from all over Taiwan, and had diverse ideas and objectives. There were three major demands: popularizing civilian education, establishing Taiwan’s distinctive culture, and assuming the mission of changing the world.

What attitude should the Taiwan Cultural Association adopt when facing the difficult situation of colonization, as well as oppression and class exploitation? This became the core issue of organizational transformation and transfer of authority.

Driven by the Taiwan Cultural Association, “cultural” became a widely-known adjective. On the one hand, it referred to political action against a foreign regime. On the other, it promoted new thoughts and concepts. It can be said that it was a “confrontation on both sides,” between the Japanese Governor-General and local society.

Many of the handwritten, block-printed, and relief-printed flyers and declarations or newspapers have been lost, so it is hard to trace times and places. However, by reading the vividly powerful contents and reproducing the context, we can see that members of the Taiwan Cultural Association were committed to expressing new knowledge, playing an influential role, and trying to change the world.

Battles in Time and Space

Members of the Taiwan Cultural Association promoted various social and cultural transformations, in an attempt to refresh people, change the way they saw the world, and fight, in daily life, battles of “time and space” on a mental level.

The entrances of temples were places where people often gathered, and in the 1920s, when the Taiwan Cultural Association organized lectures in rural areas, the preferred location was just in front of a temple. On the one hand, they were convenient gathering spots. On the other, doing so provided both a link with and a challenge to tradition.

Be a New Citizen, Be Yourself

Social reform is based on personal innovation, and the Taiwan Cultural Association tried to popularize the concept of new citizens. It had a limited impact on the system of colonial domination, but a profound impact on the transformation of personal concepts and lifestyles in Taiwan society. In other words, it helped reshape personal concepts. In that era of turmoil, it was part of the period’s transformation of those who lived through it.

After ten years of turmoil in the association, members had changed their ideas about academics, the workplace, the family, interpersonal relationships, and lifestyles. This can be understood by the following typical temperaments and concepts. It formed the concept of “new self.”

Lai He published a novel in the Taiwan People Times following the left-right split in the Taiwan Cultural Association. In the story, two children abandoned by their mothers are in darkness. They must rely on their intuition, holding hands and walking forward, trusting each other. They move forward aimlessly. After crossing obstacles and dangers, they hear wind and rain, and also the sound of springs and the sound of wind whispering through pine trees. Continuing to move forward, they fight fatigue and cross a bridge. Occasionally, one opens his eyes slightly and sees scenes of nature. In his excitement, he lets go of his partner’s hand, then loses his partner. He doesn’t stop moving in the darkness, but doesn’t know which way to go.

When we look back on the past, it often seems that we can know the journeys that our predecessors undertook. But those individuals moved ahead uncertain about the future. After brief encountering the Taiwan Cultural Association, where did they end up?

You might think that, a hundred years ago, the principles and campaigning of the Taiwan Cultural Association were a matter of course. Indeed, civil rights, gender equality, and marrying for love (rather than arranged marriages), have become common social values. However, other issues — the weakness of labor unions, forced evictions, unaffordable housing, and homelessness — have yet to be resolved. Colonial dictatorship is a thing of the past, but political turmoil, extravagant religious ceremonies, and vulgarity on the internet are sources of irritation and targets of criticism.

For the past hundred years, material civilization has changed day by day. We have yet to reach an ideal state. But if we remain curious, observant, enthusiastically engaged, and enjoy the world from our hearts, we can undoubtedly be “blessed global citizens.”