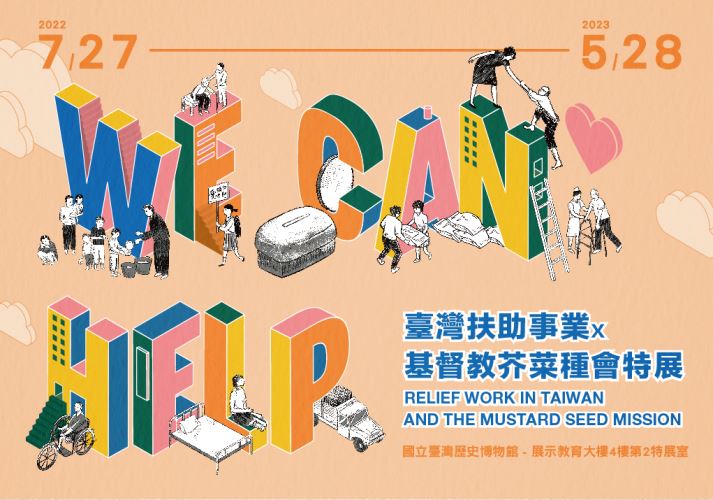 “Taiwan Can!!”
COVID-19 began wreaking devastation throughout the world in April 2020, and as countries scrambled to cope with the crisis, 26,980 people of Taiwan contributed to a crowdfunding project and reached their goal in just 15 hours, responding to the world’s cry for support: “Who Can Help?”

Just 50 years ago, Taiwan was in no place to make that declaration. The country was embroiled in darkness. Many of those who suffered political persecution chalked it up to bad fate that had to be endured.

A photography portfolio titled Taiwan: Island in a Vacuum, said of the martial law period: “That particular era was a proverbial black box… no information was allowed into the country, and all news about the country was locked in… people of Taiwan had no idea what was happening in the world. Their voices were taken away from them… they were in the center of a vacuum, the eye of a typhoon…”Nonetheless, a group of foreigners arrived on the island then known to Westerners as Formosa in the late 1940s, in an era widely regarded as “a vacuum,” and traveled to remote regions to offer help to those in need.

Mennonites, the Norwegian Missionary Society, US military aid, the International Agency for the Prevention of Blindness, the Christian Children’s Fund (which later evolved into the Taiwan Fund for Children and Families) and many other aid organizations from around the world made their way into Taiwan into 1950s, thanks to Presbyterian Rev. James Ira Dickson and his wife, Lillian R. Dickson. They were the founders of The Mustard Seed Mission, and tireless advocates for Taiwan. Many of these organizations have put down roots in Taiwan and become household names. In recent years, these localized charity organizations have evolved into an impressive and dependable body which pools Taiwanese people’s support for international aid programs.

As we look back on that tumultuous, challenging history, and examine every act of goodwill that helped us grow, we can reevaluate what it means to help others. It shines a light on Taiwan’s experience as a beleaguered country in great need of foreign assistance, to one of the most charitable and generous aid givers that the world can count on.

One Good Deed a Day

In the 1895-1945 period of Japanese rule, charitable instincts were remobilized into a variety of school assets, to assist victims of misfortune, and disaster relief efforts. Charity organizations and programs were launched to provide care and assistance to soldiers and police officers injured during the colonial authorities’ campaigns to control the indigenous tribes. However, those indigenous people, even while subjected to so-called reeducation programs, did not benefit from outreach programs implemented by Han people.

Just as conventional social relief programs were being developed in local Taiwanese communities in the 18th and 19th centuries, Western missionaries brought with them and expanded other forms of emergency relief. Of these, the one that had the most profound impact on Taiwan was scientific medical treatment and personal hygiene. The Mustard Seed Mission, created after World War II, was a Christian relief organization set up solely for Taiwan. It combined medical assistance, caregiving, and support. For residents in remote, mountainous regions of Taiwan plagued by diseases and poverty, the Mission offered comfort and assurance. The Mission’s development in Taiwan coincided with the arrival of US military and economic aid. As assistance from American civil organizations made its way into Taiwan’s mountainous interior, a conveyor belt of resources between the US and Taiwan came into being.

A Plea for Assistance from Taiwan

Rev. James Ira Dickson and his wife, Lillian R. Dickson, came to Taiwan during the Japanese occupation to serve as Presbyterian missionaries. The couple returned to Taiwan again after World War II and started to expand their medical service mission specifically for people living in remote mountain areas. Rev. Dickson served as the coordinator for the cause, integrating resources and contributions. He also invited Mennonites to join the program and improve medical services in mountainous regions, becoming a key figure in the development of rotating health-care services and mountain clinics. He also established schools to educate youth and children, published Light in the Mountain magazine, launched a church community communication network, and documented mission work progress.

From 1951 onward, Lillian Dickson wrote to friends and family in the US, asking for contributions. Once The Mustard Seed Mission became established, donors responded in droves. The letters she sent home grew into extensively-shared bulletins about her work in Taiwan. By 1954, the mailing list had 25,000 subscribers and donations came in from supporters in the US and Canada. These funds were used to support church planting in more than 400 indigenous communities and the training of indigenous missionaries, as well as medical services in the mountains.

Numerous lives were hanging by a thread in a land at the geopolitical edge of the world. The Mustard Seed Mission and its overseas supporters became a pair of outstretched hands that gave these disenfranchised people a lift. “Immediately, instantaneously, now” – Lillian Dickson’s single-minded focus was on saving every disadvantaged soul, without regard for the demands of tomorrow. She reached out to tuberculosis (TB) patients in remote areas; young single mothers who were ostracized in indigenous communities; penniless orphans living on the streets; lepers; and those afflicted by blackfoot disease. Not only that, she also worked to help the disenfranchised become self-sufficient, independent, employable, and supportive of each other.

Half a century later, subsidy receipts and applications archived in The Mustard Seed Mission show us the heartbreaking reality facing the disadvantaged: Their plight was disregarded in the greater scheme of anti-communism and martial law, and given no media attention.

“Let’s go to places where we are needed the most,” Lillian Dickson said in 1927.

Fast-forward to the 21st century, and social workers who devoted themselves to the decade-long reconstruction effort that followed the September 21 Earthquake of 1999, also said: “The reason I’m going there is because no roads are visible.”

Taiwan, a country at one time regarded as being “in a vacuum” by the international community, is now self-sufficient and thriving. But is that really the case?

Taiwan’s social welfare system has become more robust since the 1970s. Advocacy projects launched by The Mustard Seed Mission and other postwar charities have been incorporated into the welfare system. But no matter how far we go, there will always be inadequacies, where at-risk people await help.

The only way out of this is to accomplish each and every project regarded by the establishment and mainstream society as trivial. As they grow in number, they will combine to form an extensive support network for every individual with needs, so that, one day, those people can also lend a helping hand.

As they reach out to those in need, our outstretched hands can dissolve walls and barriers. They can also strengthen Taiwanese society in its entirety as we face the future.