Our Comic Memories: A Special Exhibition on the History and Future of Comics in Taiwan 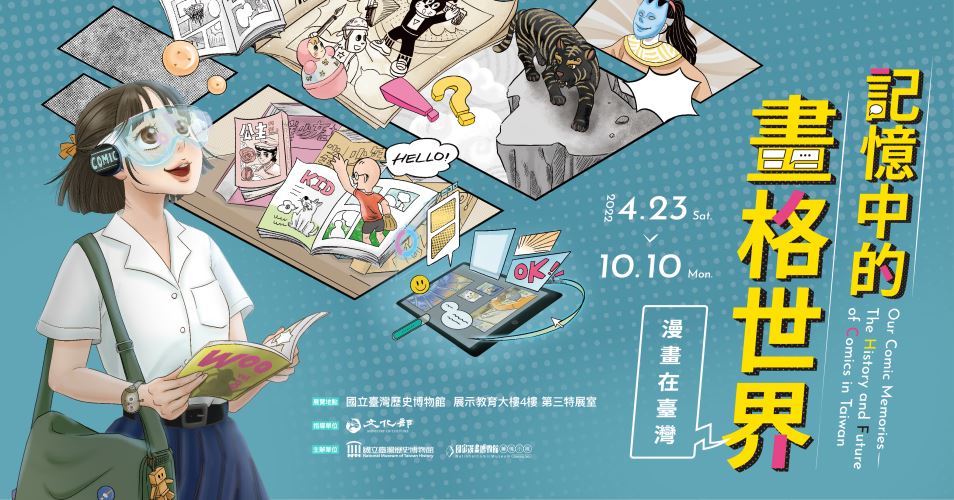 Comics, a popular narrative medium that uses catchy illustrations and words to tell stories in serialized form, made their appearance in Taiwan in the early 20th century. Norakuro from the Japanese colonial period and Jhuge Shiro debuted in the 1950s were both familiar comic characters throughout Taiwan. Families that subscribed to the Mandarin Daily News also shared a comfortable familiarity with the comic Henry and Dennis the Menace, while China Times subscribers followed the antics of the four Buddhist monk protagonists in the serialized Wu-Long Academy. Japanese manga have also long been woven deeply into the Taiwanese common memories across generations.

Furthermore, comics have helped shape the Taiwanese world view. The dramatic fusion of fiction and non-fiction in comics, such as The Adventures of Tintin and Daughter of the Nile (Crest of the Royal Family), helped sow seeds of curiosity about world history and geography in the minds of countless young Taiwanese readers. Finally, comics have also been used by authority figures as a medium for controlling and framing public narratives on issues such as the importance of patriotism and how to be a good student.

This exhibition, curated to explore memories of comics in Taiwan over the past century, is designed to pique your nostalgia, deepen your appreciation of the characteristics and appeal of comics, and reveal the special place that comics hold in our collective consciousness.

Taiwanese discovered their love for comics in newspapers, bookstores, and libraries during the Japanese colonial period. Taiwan's largest-circulation newspaper in the 1930s, the Taiwan Daily News (Taiwan Nichi Nichi Shinpo), carried many comic strips and advertisements for comics-related magazines, such as Shōnen Club. In addition, comics carrying complete stories, from The Adventures of Dankichi (Bōken Dankichi) and Norakuro were sold in bookstores. The latter was also available in public libraries. However, as the Pacific War loomed and Japan tightened cultural and ideological controls over its territories, threads of Japanese militarism and nationalism invariably found their way into comics in Taiwan, highlighting that, while comics as a medium can offer an enjoyable escape, they can also be used to shape public opinion.

In the early post war years, many children got their first taste of comics in children's magazines, which, in the 1950s, were filled with lessons and knowledge for young learners and illustrated novels and serial "picture stories". As they grew in popularity, these magazines incorporated comic strips as a popular new feature, and several magazines, like Comic King Weekly (Manhua DaWang), were launched with a focus solely on serialized comics. Most magazines, however, ceased publication in the 1960s when book rental shops stocked with shelves full of comic books became mainstream. The rapidly growing market for comics brought many new and talented artists to the industry.

In the 1950s, both government and private-sector publishing houses printed children’s magazines. Primary School Kids (Xiaoxuesheng) and Primary School Kids Illustrated (Xiaoxuesheng Huakan), the flagship government magazines in this genre, were distributed directly through the national education system. They focused on popular science, traditional virtues, and patriotic stories and taught readers to be good students and citizens. Student’s Companion (Xue You) and Oriental Youth (Dongfang Shaonien), two of the most-popular privately-published magazines in this genre, were filled with illustrated novels and story comics of adventure, romance, and history and were the primary outlet for comic artists of the time to earn a living. Comics in the children's magazines were exceptionally popular among readers and played an important extracurricular role in framing children’s ideas about society.

The practice of book rental dates back to the Japanese colonial period (1895-1945). Early on, pedicabs transported mobile book-rental stalls and set them up in locations where people congregated. Entrepreneurs also set up permanent stalls on street corners and along the outside of buildings. Comic books were frequently displayed on simple wooden shelves where they were held in place with or hung from a piece of string. Taiwan’s postwar economic slump further fueled the popularity of book renting. Multiple people gathered around enjoying one rented comic book was a common scene in those days. In the 1960s, book renters steadily expanded their selections, offering comics in various genres, such as adventure, science fiction, humor and romance, but the “wuxia” or martialarts hero genre quickly outstripped all the others in popularity.

The practice of book rental dates back to the Japanese colonial period (1895-1945). Early on, pedicabs transported mobile book-rental stalls and set them up in locations where people congregated. Entrepreneurs also set up permanent stalls on street corners and along the outside of buildings. Comic books were frequently displayed on simple wooden shelves where they were held in place with or hung from a piece of string. Taiwan’s postwar economic slump further fueled the popularity of book renting. Multiple people gathered around enjoying one rented comic book was a common scene in those days. In the 1960s, book renters steadily expanded their selections, offering comics in various genres, such as adventure, science fiction, humor and romance, but the “wuxia” or martialarts hero genre quickly outstripped all the others in popularity.

Beginning in the 1950s, Taiwan’s public could read Western comic strips in newspapers, like the Central Daily News, which carried Blondie, and the Mandarin Daily News, which carried Henry and Dennis the Menace. Publishers, touting the value of using comics to learn English, regularly came out with books featuring Western comics with the dialogues in both English and Chinese, attracting a large and loyal following. Blondie, Henry, Snoopy, Garfield, and other comic strip characters feature prominently in the childhood memories of many older Taiwanese.

Japanese manga had largely taken over the shelves of book rental shops by the end of the 1970s. The Comics Code stipulated that publishers were required to submit the proposed draft of a new manga book to the National Institute for Compilation and Translation (NICT) for review. NICT’s detailed response typically required significant changes be made to the content. For example, the names of the characters and places needed to be changed to Chinese names; character clothing had to be redrawn as Chinese-style apparel; long hair on male characters had to be redrawn in a manly clean and short style (“in the interest of upholding good morals”). Amended copyright law passed in 1992 gave copyright protection to Japanese manga, setting into motion a gradual “rectification” of character names and attributes so that most manga titles were published under different names at different times. As a result, despite the fact that they read the same mangas, many people have very different memories about them, such as what their beloved stories were called, where they took place, and who the main characters were.

From the late 1970s through the 1980s, new comic-centered magazines appeared in large numbers. In 1983, the launch of the exceptionally popular comic strip Wu Long Academy in the China Times drew public attention back to locally inspired comics, sparking a new wave of interest in comics. Comic magazines in the last two decades of the 20th century covered the pirated and copyright-protected Japanese boys’ and girls’ manga magazines, Western comics, the newly emerging universe of Taiwanese comics, and even serialized comics from Hong Kong. This unprecedented diversity promoted increasingly broad and varied perspectives.

5.Surfing in the Digital Space

Accessing various types of entertainment, such as comics, novels, TV shows, and movies, in digital form is par for the course today in the 21st century. Printed paperback comics have given way to digital renderings of the same. In fact, modern readers may only discover the origins of their favorite comic strip/manga characters after first enjoying a “reboot” version or watching a dramatized video series. Comics have “taken wing”, finding new expression in formats, such as digital books, creative images posted to social media, and smartphone-based webtoons. Mention “comic” or “manga” to a university student today and they will likely think of files and images stored on a hard disk or the cloud (or something browsed online), rather than printed paperbacks lining a bookcase.

Although Taiwan lacks a well-established, mutually supportive comics industry like Japan, the country has shown a remarkable ability to adapt comics to a wide array of new media formats. The 2001 landmark adaptation of the Japanese manga Hana Yori Dango(Boys Over Flowers) into the TV series Meteor Garden was a domestic ratings hit that was also successfully syndicated in other Asian markets. Building on this pioneering example, more cross-domain projects have been launched in recent years, including dramatized TV-series versions of the Ruan Guang-Min comic Yong-Jiu Grocery Store and Zuo Hsuan’s The Summer Temple Fair and the development of comic-based digital games, audiobooks, stage theater releases, as well as literature being translated into comics. While across multiple media platforms may be the comic genre’s strategy for survival in the digital age, one thing remains the same – the need to tell a great story!

In the digital age, digital media has gradually replaced the paper media, sparking changes in the reading habits of comics aficionados. Even those who prefer the tactile pleasures of turning pages and double-page spreads cannot help but notice the trend of digital reading into their comic space. Beyond accessing comics via online social media, online platforms, and smartphone apps, today’s comics/manga enthusiasts are increasingly accessing interactive formats, 3D, AR/VR/MR, and AV special effects to enhance their experience. The future of digital comics is truly boundless and the new formats now just becoming available will surely shape the memories of this new generation of comics readers.

Final Thoughts: Comics in the Repository of Our Memories

Comics are a part of our childhood memories and, even today, remain central to the lives of many readers.

Did you ever hide under the covers so you could continue reading comics?

Did you ever take your comics to school to share with your friends, only to have them unfortunately confiscated by your teacher?

Did comics ever inspire you to learn more about a subject?

Were you inspired by comics to become a hero in real life?

Did you ever engage in long and absorbing conversations with your friends about comics?

Comics offer much more than common memories. They provide a key to understand the world around us, shape our beliefs and outlook on life, and reflect the contemporary zeitgeist. Unfortunately, the comic book memories of many are withering in the face of digitalization. It is our hope that this special exhibition will play a positive role in helping ensure that the “framed world” of comics remains firmly and pleasantly a part of our collective memory and will encourage the advancement of comics into a myriad of new formats and possibilities, providing a never-ending stimulant to Taiwan’s cultural creativity.