Dare to be Different: The Humanism of a Taiwanese Scientist 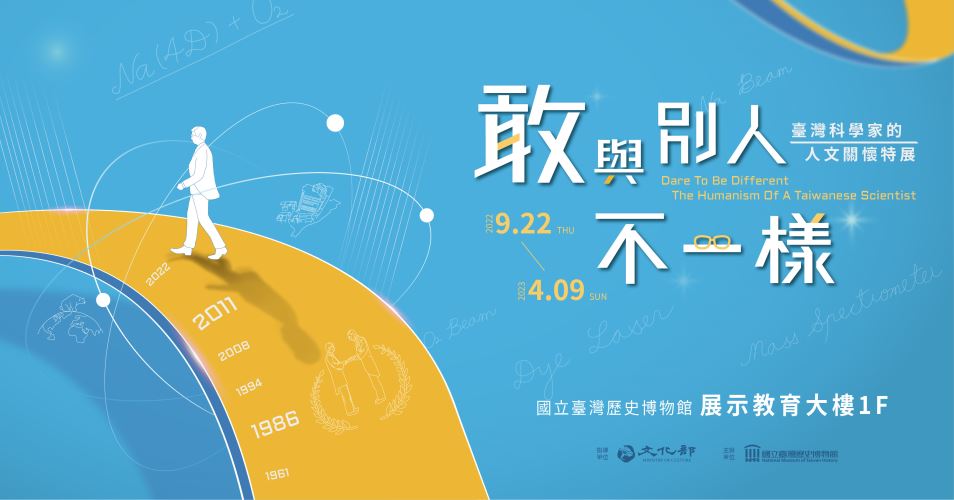 The Story behind the Exhibition

Former Academia Sinica President Dr. Yuan-tseh Lee donated his collection of personal award certificates and medals, including his 1986 Nobel Prize gold medal, to the National Museum of Taiwan History in 2021. The NMTH special exhibition Dare to be Different: The Humanism of a Taiwanese Scientist curates this collection, and highlights how Dr. Lee’s unique path led to his many exceptional accomplishments in science, politics, and humanism, and brought lasting, positive changes to our world.

The stories behind Dr. Lee’s medals manifest the modern scientific spirit of rationalism, as well as humanism’s empathy and desire for peaceful coexistence. The polestars of rationalism and humanism lit Dr. Lee’s path forward and inspired his work for the betterment of all. The story of this “daringly different” scientist embraces the realms of both the modern sciences and ecology, and offers an engaging example of how Taiwanese can contribute to humanity and to the improvement of our shared earthly home.

Dr. Yuan-tseh Lee left Taiwan in the 1960s to continue graduate studies and research work in the United States. His sharing of the Nobel Prize in Chemistry in October 1986 made him an instant media sensation in his home country, and reporters and commentators eagerly sought his opinions on a broad spectrum of social issues. At a time when Taiwan’s future and very status as a sovereign nation seemed in question, Dr. Lee and his Nobel Prize shone like a beacon in the darkness. In interviews, he candidly shared his opinions and insights, showing a level of integrity and critical thinking rare in public figures of the time. At a time of national uncertainty, Dr. Lee quickly rose to prominence as a social bellwether.

Dr. Lee’s lifelong interest in scientific research started in high school after he read the story of Marie Curie. His most-celebrated scientific achievement, the universal crossed molecular beam instrument, was the result of a dedicated research into molecular collision dynamics in the United States. His strong independent thinking capabilities, indefatigable passion for research, and open communication style were all critical factors in this achievement.

During the 1980s, Dr. Lee and his senior colleague, Dr. Chao-ting Chang, laid the groundwork for Institute of Atomic and Molecular Sciences, Academia Sinica, which opened in 1995. Today, this institute is one of the world’s foremost research organizations in the field. Institute scientists also actively promote public science education and work to continue expanding and deepening leading-edge scientific activities such as The Marie Curie high school science camp in Taiwan.

Dr. Lee returned to Taiwan in 1994 to serve as the 7th President of Academia Sinica. His public service career in Taiwan has included serving as convener of the Consultative Committee on National Education Reform (1994-1996), publisher of the socially progressive magazine New Homeland (1999-2001), and head of the 921 Earthquake Reconstruction Public Coordination Team (1999-2000). He was also a member of Chen Shui-bian’s National Policy Advisory Team during Chen’s presidential campaign (2000), convener of the Inter-party Cross Strait Policy Advisory Group (2000), and leader of Taiwan’s delegation to APEC (2002, 2003, and 2004).

After his time at Academia Sinica, Dr. Yuan-tseh Lee was elected president of the International Council for Science (ICSU) in 2008. In that position, he focused on priority science issues in developing nations and on improving living and economic conditions across the world through cross-disciplinary scientific innovation. Moreover, global climate change was a key concern and focus of his ICSU presidency, and he helped direct the council’s efforts toward cooperating to build a future in which humans live in sustainable balance with nature.